It’s a slow trickle, thus not much to report, but information is still coming in. Follow-up calls and emails are being send, and for the most part I am waiting for responses. I had planned on doing surveys with 6 or 7 schools on Friday but that meeting has been pushed back a week so I don’t have any surveys on the books for the week (but that doesn’t mean I or one of my techs won’t do any as we are waiting for several call-backs).

Thursday evening I will be giving a talk to a group of gardeners about phosphorus problems and sustainability and how that relates to their garden which will give me an opportunity to look at how the garden is growing and follow-up with the organizers who will be sharing final data in November. I really want this presentation to be engaging and interactive. I know my audience has no background knowledge and for many of them it is their first season in a garden. Instead of preparing a talk, I have decided to start with probing questions and take it from there. If it is nice outside we will in the garden so I will start from their practices and experiences in the garden and try to work my way up to where P comes from and where it goes after harvest and try to end with what they, as consumers and gardeners, can do to move towards sustainable management.

On a related, but somewhat tangential note, I visited the Mosaiculture exhibit at the botanical garden over the weekend. It was pretty spectacular, but being the nerd that I am, I was most excited about where the exhibit ended: in the middle of the garden with beds of food, fiber, and medicine plants! I had visited this garden in late may and thinking of the before and after (see the pictures above to those at  the bottom for this post to see for yourself) and evolution.

Just as the gardens I have visited have evolved over the summer, so have my skills. It is amazing how much more comfortable I have gotten asking questions and giving the survey and I think I make people feel more comfortable than at the beginning of the season (or maybe its just that I am less apprehensive about going in to the meeting). I don’t have a natural facility calling people or going up to strangers, but this project has forced me to step outside of my comfort zone. I am not expert, but it was gotten easier. All along, the protocol, calendar, and spreadsheets have been really helpful to keep me going. 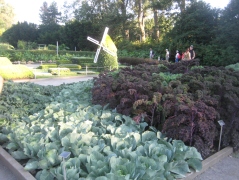 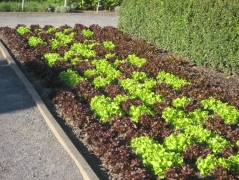 Finally, another great dance-science link. This one is Merritt Moore, is a PhD candidate in Atomic & Laser Physics at Oxford University and a beautiful former professional dancer.