I have previously mentioned surveys in private gardens a few times in update posts, but I thought I would take a moment to recap how surveys in that type of garden have been going. I had put the main responsibility of finding private gardeners on one of my two field assistants (and my self of course) that had previous work experience in the Montreal UA scene. Both of us reached out to friends, family, work colleagues, public posts and various listservs of organizations that have avid gardeners. The response rate was been low however for the “cold-calls” and it seems that although our friends, family, and acquaintances say yes, its hard to actually get them to sit down and do the survey. My objective was to get at least 30 respondents (about half in balcony settings and the other half with ground gardens). Although we have identified more than enough gardeners that have said yes to taking the survey, its already mid-July and we are still missing more than half of their responses.

Here is an example of a lovely garden I visited in June: 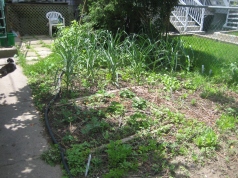 Earlier in my field season I decided I wanted to do mostly face-to-face meetings to fill out the survey, ensuring that questions were answered fully and in the way I needed (although even in person I can’t really control all of that). The difficulty we are experiencing to get people to set a time to meet has lead me to re-open the option to let people take the survey online and call me with questions if they have any. I think this might mean I have to do follow-up calls when I am doing data processing however, because people might not fill it out exactly right (even though there are instructions and what not).  I have suggested this online option not only with the private gardeners who are not responsive to setting a meeting time, but also organizations that I have contacted multiple times and have been unsuccessful in scheduling a meeting for a long time.

I am hoping that response rates will increase although I know late July and August are prime vacation time and that I might need to refocus my energies for an intense period in early September.