Keeping records of the data and compiling survey responses:

I really wanted to find a digital tool to directly collect and store all the survey responses I was getting. I felt strongly about wanting to find this (these) tool(s) because over the years I have seen my friends struggle with transcriptions of interviews and survey results. Such a process is really time consuming, which means even though the survey only takes between 15 minutes and an hour to fill-out, you still have another hour of work on that one survey to digitize it to be able to use the results one day. In addition, there can be errors in the transcription process like putting information on the wrong line or not being able to read your (or someone else’s hand-writing).  Because I was collaborating, we also needed a central space to share data where we could all read it and update it, thus again wanting a digital option. Such concerns are actually also what let me to want people (or me) to fill the survey’s online.

Here were the criteria I was using:

Here were my options:

Applications (online or for a tablet directly):

Here is what I chose in the end:

Lenovo thinkpad laptop that converts to a tablet with a sim card to be able to access lime survey.  Neither of these choices was perfect, but given financial restrictions and the functionality of the different options this made the most sense. Although bulkyer, the convertible laptop was a subsidized option at my university, and based on reviews is really good for field work as its sturdy and have an 8hour battery life.

The tablet is great to collect data digitally but it would not have been optimal to use a tablet application as we only have one and have at least 5 people collecting survey data. As such having the tablet with a sim card  (which was not the default option but we could get it installed) allows me to fill the survey out directly online when I have the tablet and allows others who are using paper surveys to transcribe everything into one central and safe location.

I chose limesurvey first and foremost because my University has a license and hosts the surveys you create on a secure server (thus I feel safe about the protection of the data, its free for me, and when I send out the link for those who want to fill-it out it looks very official).  Limesurvey didn’t have all the options for the response I wanted (like mixing fill-in the blank and drop-down menus in the same table) but I was able to find acceptable work-around. If satisfied all my other criteria. 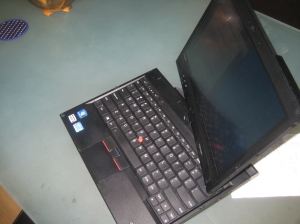 Above are a couple of picture of the lenovo thinkpad we are using to administer the survey.

Note: It also seems really important to follow-up with your respondents after you do the survey. The follow-up builds reciprocity in case you need something later in the research project but also to not “poison” the field for other research projects using the same actors are you did. I am thus trying to remember to always send a thank you note and be sure that I send a 2 page report on my study to all actors that helped me (this means keeping a good and accurate list of everyone you contacted during the field work).